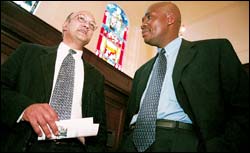 Meeting of minds: (Left) Dean of Science and chair of the NRF board, Prof Daya Reddy (an A-rated researcher himself) with guest Dr Khotso Mokhele, NRF president.

As UCT's 175th anniversary campaign moved into gear last week, the university gathered its top National Research Foundation-rated researchers for a celebration of their own, reflecting on the achievements of those who have built UCT's stature in this arena.

However, host DVC Professor Cheryl de la Rey said that although the institution boasted 213 NRF-rated researchers, the number of recognised young researchers was cause for concern in an institution of UCT's size and reputation.

"For this reason, the Emerging Researcher's programme has been developed and is currently being implemented."

It was an august gathering under Smuts Hall's historical stained glass windows, and guest of honour Dr Khotso Mokhele, NRF president, was there to share in the celebrations.

It also afforded a rare and important networking opportunity for a community often separated by academic commitments and campuses. Mokhele joked that he had even managed to get chemistry's Professor Luigi Nassimbeni to wear a tie.

After the last round of ratings, UCT has 16 newly-rated researchers as well as two new A- rated researchers, Professors Theo Stewart (statistical sciences) and Kit Vaughan (biomedical engineering) (see MP Vol22#33 and Vol23#04 ). The latter A ratings push the university's tally to 16 out of the country's 44.

Responding to press criticism of the NRF's rating system, Mokhele said he did not believe in being defensive.

"It was designed by us and is a system that works incredibly well for us in promoting a culture of research."

He lauded those who had subjected themselves to the "brutal" peer review system in acquiring their ratings.