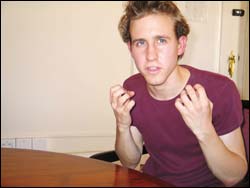 UCT commerce student Rob Garlick talks smoothly and without hesitation; the flow of a seasoned debater. But the coach of the South African schools debating team has reason to be euphoric; he has taken the team to second place in the world schools debating championships in Stuttgart, Germany.

Pitting their wits and oratory skills against a field of 28 nations, the quartet beat out the big five contenders and narrowly missed out on the top honours. These went to (you guessed) Australia. Nonetheless, a heap of praise is due - this is the first time a South African team has fared so well.

Talking to a local financial magazine, the third-year student said: "We had a draw from hell: Canada, the US and England on the first day. All three are former world champions. And then later we had Ireland and New Zealand."

"The final was quite tense with the panel divided 6-3 in favour of the Australians, but with the crowd of 2 500 in the Stuttgart Town Hall firmly behind the South Africans," Garlick recounted.

The topic, The World is facing a Clash of Civilisations, saw the home boys preparing a broad argument, but as the Australians led the motion with a narrower take on the subject (they confined their argument to the clash between Muslim culture and the West), it took some hasty rethinking to get the team on track with a pared-down counter argument.

But this is where their mental toughness kicked in.

"Coaching a debating team is much like coaching a sports team. Besides the technical training, you need mental and motivational training," Garlick explained. Fellow UCT debater, Kate Orkin, took the team under her wing for the mental conditioning, and did a sterling job.

"It was evident among other top contenders this year that mental training was lacking," Garlick added. For example, the traditionally strong New Zealanders cracked in earlier rounds (even though their Black Caps are giving our cricketers a bit of a klap on some spongy wickets at the moment).

Garlick believes that the strength of South African debating has been built on a strong schools system. Some 8 000 pupils are part of the domestic scene. But it's not only participation from the plumier schools that counts. Many ardent and talented debaters are being recruited from disadvantaged areas as groups from institutions like UCT move in, spread the word and train up tomorrow's stars.

"What is especially heartening is that we're seeing some of these youngsters moving up into UCT," Garlick observed.