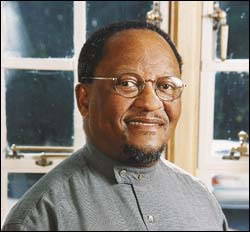 In a coup for UCT, Vice-Chancellor Professor Njabulo Ndebele and Professor Lynette Denny have been awarded Western Cape Provincial Honours.

Candidates are nominated by the public, after which an advisory panel (a group of distinguished citizens representative of the Western Cape) make recommendations to the Provincial Cabinet, who approve the awards. This year, 45 people received accolades.

In recognition of his outstanding meritorious service in the interest of the Western Cape, Ndebele was awarded the Order of the Disa: Officer.

In his citation, Ndebele is praised for his serious stance regarding accountability and transparency. He is also cited as a champion of the right of artists to free expression, regardless of their political affiliation.

For rendering noteworthy meritorious service in the interest of the Western Cape, the Order of the Disa: Member, was awarded to Denny.

Denny was acknowledged for her extensive research and major contribution in the area of obstetrics and gynaecology.

Included among her various research projects, related to the prevention of cervical cancer, is the Khayelitsha Cervical Cancer Screening Project, which has been in action since 1996. This programme has gained immense international recognition and is expected to revolutionise the treatment of women in low resource settings who may have cervical cancer abnormalities thereby significantly reducing the death rate from cervical cancer.