It's a New Day at Artscape 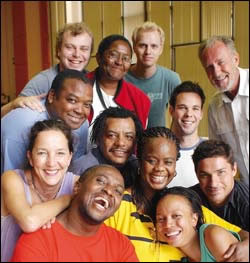 Join Artscape in celebrating South Africa's tenth year of democracy when their specially commissioned production, New Day, takes to the stage from March 9 to 13.

New Day runs a spotlight over the past 10 years and highlights aspects of the events and processes that have brought the country to this celebratory moment. Through a combination of drama, dance and music on a strikingly dramatic set, the production eloquently captures some of the poignancy, fun, drama and the (often) downright absurdity that has brought us to 2004.

A recurring theme throughout the show is the contrast between major national events and the experience of "ordinary" South Africans on the road to democracy. A team of the country's leading contemporary writers - many of whom studied at UCT - contributed to the script, including Fatima Dike, Abduragman Adams, Nadia Davids, Greig Coetzee, Fiona Coyne, Antjie Krog and Malika Ndlovu.

UCT alumni Lungile Jacobs and Andrew Michau are responsible for the musical score that ranges from the soulful jazz of the township to the glitter of Bollywood.

The show also features a number of other well-known UCT alumni.