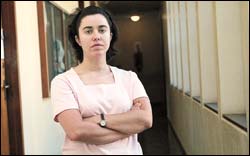 Spanish is the fourth largest language in the world, spoken by more than 300 million people, the bulk of these found in the Americas (the US boasts more than 22 million Spanish speakers, its southern neighbour Mexico another 80 million).

Sixty UCT students hope to join this global community in the near future.

The group is the first at the university to sign up for the School of Languages and Literatures' February-launched programme in Initial Spanish. The course makes UCT the first university in the Western Cape - and only the fourth in the country - to offer studies on the language.

The classes were prompted by a petition made to the school by 100 students in 2002, urging it to start up a programme in Spanish. Little would have come of the request - it simply wasn't one of the humanities faculty's many pressing priorities, admits the school's director, Associate Professor David Wardle - but for a chance meeting with the Spanish ambassador, Miguel Angel Fernandez de Mazarambroz, at a consular do at the Italian embassy last year.

Keen to bolster the presence of the Spanish language and culture in South Africa, De Mazarambroz volunteered to scare up a suitable lecturer, should UCT give the go ahead for a programme. After extended negotiations between Spanish authorities and the university, the Spanish Agency for International Co-operation pledged to fund the services of a lecturer.

The AECI sought out Navarra-born Maria Delgado, a Spanish-as-a-foreign-language lecturer trained at the University Complutense of Madrid who, while working on her doctorate, had been teaching at the University of Salamanca. Delgado joined UCT at the end of January, and hit the ground running.

She had hardly settled into her spartan office in the Beattie Building before she had to start lectures. She will also - at the behest of the Spanish embassy - run an evening course for the general public at UCT as of March

The registration for Initial Spanish well exceeded the school's modest expectations. All of 140 students - from a range of faculties - applied for a place.

It's hoped that the interest in the evening course will echo that of its accredited counterpart. The course will run from 17h00 to 18h30 on Tuesdays and Wednesdays for 12 weeks, kicking off on March 2. Cost for members of the public will be R1 000, while UCT staff need pay only R600. Only 20 people can be accommodated, however.

More information on the course is available from Sue Beele at 650-2607, or via e-mail at leeb@humanities.uct.ac.za.