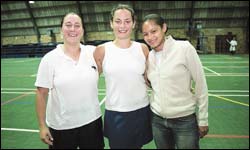 At the fore: (From left) UCT's Robyn Silverstone (sans her protective mask, for once), Tammy Kruger and Liesel Dorothy have been named for the SA under-21 squad to attend a training camp in Stellenbosch.

Three women hockey players - one of whom who has yet to make her debut for the UCT side - have caught the eye of the national selectors early in the year.

Striker Liesel Dorothy, defender Tammy Kruger and goalkeeper Robyn Silverstone have been called up for the SA under-21 training camp in Stellenbosch in early March. After the camp, a national side will be selected to go up against the many squads that will be competing in the April inter-provincial tournament.

This competition and other fixtures will serve as overtures to the junior world cup coming up in Santiago, Chile, in 2005.

Kruger and Silverstone are new to the international scene, although both have racked up a string of provincial caps.

Dorothy, at only 20, is something of an old hand at the international game, however. The Port Elizabeth native has represented various Eastern Province sides over the years, at school, junior and senior levels. She's also had a host of SA under-21 outings prior to the March camp, and has captained the side.

In 2003, aged just a tender 19, she made her national senior debut against England. She's become a fixture of the SA side since then, and was part of the squad that went up against the Australian Hockeyroos in the hard-fought series in South Africa just weeks ago.

This year - after some administrative mishaps - Dorothy has also registered for a BCom at UCT, following on two years at the University of Port Elizabeth. She will also be playing for UCT, although the bureaucratic hiccup has delayed her introduction into the side.

The move west, she says, was inspired mainly by her desire to sharpen her game.

Western Province is home to a battery of top-flight national talent (including UCT captain and coach Kerry "Beewash" Bee, as well as SA under-21 coach and SA senior assistant coach Jenny King) while the Eastern Province squad - playing in the B section - can boast only a handful of players and coaches of similar ilk.

At one point last year, Dorothy was EP's only SA representative.

Down here in the Cape, she hopes to play many more competitive games, and so up her chances of making it into the yet-to-be-named SA squad for the Athens Olympics in August. While she's been a regular in the SA team since her debut, she would like to feature consistently in the starting line-up, and is upbeat after having started in three of the four games against Australia.

Running out for the side in Athens heads her wish list by some margin, however, Dorothy confides.