Lecturer finally gets to cap offspring 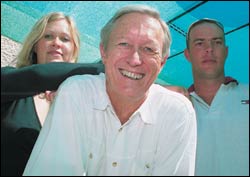 The family that learns together: Dr Augustine Shutte (front) with graduating children Anna and Jonathan.

Philosophy lecturer Dr Augustine Shutte has had to be a patient man, but this year, just as he is about to take official "retirement" from UCT, he finally gets to cap some of his offspring.

Shutte's 22-year old daughter, Anna (BA honours in English, with distinction), and 26-year old son, Jonathan (BCom), both graduate from UCT this week, and dad will be on the stage at their respective ceremonies to drape the graduation hoods around their shoulders. A first for a beaming father.

But there had been capping opportunities before. Anna finished her undergraduate studies here, as did Shutte's second son Thomas (23), but both ducked out of their graduation ceremonies.

Jonathan, a former Western Province Nuffield cricket player, was the last of the Shutte brood to register at UCT. Until three years ago he had been trying to eke out a professional cricketing career in the Eastern Cape, but then decided a university degree would serve him better.

Which makes him the second Shutte to make an indelible mark on sport at UCT. His father, after all, holds the university pole vault record.

In 1958, Shutte, kitted with the sport's old-style steel pole, cleared the bar at 13-feet (just over 3.9-metres) at an intervarsity clash at Coetzenberg in Stellenbosch, the highest a UCT vaulter had ever gone. And it's unlikely that a UCT student will soar higher anytime soon, as the university has not offered pole-vaulting since 1959 when more expensive equipment - fibre-glass poles, landing mats and the like - was introduced to the sport.

Sporting achievements aside, Shutte is pretty chuffed about his graduating children's academic performances, particularly the tenacity that late-starter Jonathan has shown over the past three years, and Anna's glowing report card.

"I'm incredibly pleased," said Shutte of the chance to actually see them graduate. "Even if I had to wait until I was almost retired."

Children were late arrivals for the 65-year old Shutte, partly because he had planned on a more clerical life. After studying at UCT from 1956 to 1959, he headed for Oxford University where he read theology, with designs on becoming an Anglican clergyman.

Some time into his studies, however, he "moved over" to the Catholic Church instead, and on return to South Africa joined a Dominican monastery - one of the Church's intellectual orders, its friars very involved in teaching at universities and the like - in Stellenbosch. After six years and well into his thirties, he left the monastery to marry and have children, and also to teach in UCT's Department of Philosophy.

And although he's officially retiring at the end of this year, Shutte is not quite done with the institution. He will stay on as research associate next year - a post funded by the John Templeton Foundation in the United States - to continue his studies on the boundaries and bonds between religion and science.

Which means that he can hang out regularly with Anna, who moves on to her master's studies. Jonathan, in the meantime, will set off for the UK where he hopes to land some work.