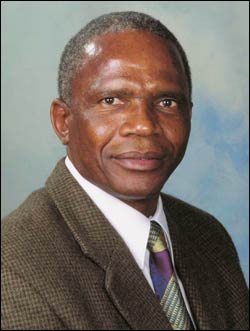 It is with regret that UCT bids farewell to Dr Benito Khotseng, Deputy Vice-Chancellor responsible for the Student Affairs portfolio. He will leave the university at the end of November.

Khotseng, who joined the university on February 1 this year, has resigned due to health reasons.

UCT's Council and Vice-Chancellor have accepted his resignation with regret.

"I would like to thank Dr Khotseng for his service to the university, and I wish him well for the future," said Vice-Chancellor Professor Njabulo Ndebele.

Following Khotseng's departure at the end of November, aspects of his particular portfolio will be distributed among the remaining Deputy Vice-Chancellors.

Ndebele said that the appointment of a new Deputy Vice-Chancellor would be completed as speedily as possible.

"The university's Council has already approved the reconstitution of the original selection committee for this post and the selection process will start shortly."

Khotseng came to UCT from the University of the Free State where he was the Vice-Rector: Student Services.

He began his career in teaching, investing seven years in the school and college environments. The years 1984 to 1993 were spent at the University of the North, where he was appointed Dean of the Education Faculty in 1992.

Khotseng took up a post at the University of the Orange Free State (as it was then known) in 1993, initially responsible for strategic programmes. He was appointed Vice-Rector: Student Services in 1996.

For the past four years he has also been a Visiting Professor in Doctoral Studies with Seton Hall University, New Jersey.

He holds a number of professional memberships and leadership roles on various bodies in the area of student affairs, as well as on higher education bodies focusing on the strategic development of higher education, both locally and internationally.