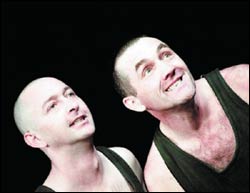 Physical pyrotechnics: (from left) Lionel Newton and Andrew Buckland star in The Well Being.

Cape Town audiences will finally get a chance to see The Well Being this holiday season. Starring physical theatre virtuosos Andrew Buckland and Lionel Newton and directed by Lara Foot-Newton, this production received national and international acclaim and will now run at the Baxter Theatre Centre from November 24 to December 13.

UCT staff and students can purchase tickets to performances of The Well Being for the special price of R25 on November 25, 26 and 27.

Wonderfully innovative, The Well Being tells the story of a small village at the edge of a forest in a valley. Struck first by devastating floods then scorching drought and in crisis, the community converges and focuses its attention on young Flo Deluge, the strange woman who lives in the forest and whose bizarre, nocturnal, obsessive digging is rumoured to have induced the rain that caused the havoc.

Flo is also rumoured to keep a strange secret down at the bottom of her well.

This is a weird, fruitful and frivolous exploration with moments of enchantment and magic, of heart-rending sorrow and cataclysmic shock. These chameleons of the stage observe extraordinary images and dissect the ordinary with close attention to detail.

They metamorphose into English aristocrats, drunken louts, and amiable Cape frogs. Their limbs become locked together into a sculptural pattern, fixing imagined characters with the formal clarity of the mime tradition yet still giving the stamp of reality and relevance to the twin themes of grace and injustice.

The Well Being has entertained audiences around South Africa, and has been staged at the Market Theatre in Johannesburg, The Standard Bank National Arts Festival in Grahamstown (1999 and 2000), among other venues, and has toured KwaZulu-Natal. Its international touring schedule has included Edinburgh, Stockholm, Harare, Zambia, Winnipeg in Canada, and the play had a nine-week season in the United Kingdom.

The collective has garnered several accolades, including a Stage Awards nomination for acting excellence (ensemble) at the 2001 Edinburgh Fringe Festival, and also finished second in The Scotsman Readers' choice for its Pick of the Fringe. In addition, Newton won a FNB Vita award in 1999 for best supporting actor, and the play was nominated for several awards including best actor, best director and best production at the 2000 Vita awards.

The Well Being promises to be not only ideal holiday entertainment but also a theatrical mindblast.

For more information, please contact the Baxter Theatre Marketing on (021) 680-3971 or book tickets at Computicket.