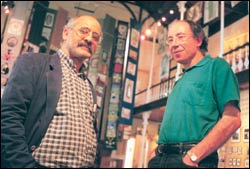 Looking at their heritage: UCT's Prof Crain Soudien and UWC's Assoc Prof Leslie Witz at the District Six Museum in Cape Town, one of the centres that could benefit from the African Programme in Museum and Heritage Studies that the two institutions will be offering together with the Robben Island Museum.

Heritage studies in the Western Cape has received a major fillip in the form of a US$500 000 (more than R3.3-million) grant from the Rockefeller Foundation in the United States.

Professor Nigel Worden and Dr Sean Field of the Department of Historical Studies, together with Professor Crain Soudien of the School of Education are, at present, UCT's representatives on the diploma's convening committee.

According to Associate Professor Leslie Witz of UWC's history department, this postgraduate diploma has been the pioneering programme in the field of inter-university and inter-institutional cooperation in the region. Launched in 1998, the programme's primary objective was to create and extend vocational possibilities in the heritage, museum and tourism sectors.

"Many of the students have returned to their institutions, throughout Africa, with greater responsibilities and promotion," reported Witz. "The diploma has also been a training ground for national museums in South Africa such as the Robben Island Museum, Iziko Museums of Cape Town and the Northern Flagship.

"Students have also been catalysts for the development of community museums and heritage initiatives, such as the Lwandle Migrant Labour Museum. Those students who were not in the heritage sector before enrolling for the diploma have since taken up positions with the South African Heritage Resources Agency, the planning department of the City of Cape Town and in local and national museums."

Some have also set up their own heritage organisations, while others have furthered their studies at graduate level, Witz added.

Building upon the diploma, the African Programme in Museum and Heritage Studies will place a large emphasis on a conceptual understanding of the terrain of public culture and of the challenges of social and institutional transformation, said Witz.

"The courses will, both critically and practically, engage with the dominant ways in which heritage is presented and represented. A great deal of the teaching occurs on-site and students will be given the opportunity to come up with creative and exciting approaches to the challenges of transformation in the heritage sector."

Similarly, an internship programme enables students to learn and apply the technical and theoretical aspects of museum and heritage practice. The programme will cover the travel and living costs of students during their internship.

The funding that has been secured will also make it possible for the museum and heritage studies programme to recruit students from all over Africa and offer bursaries for fees, travel costs and living expenses, noted Witz. A crucial element in the new programme will be the development of a series of workshops, seminars, conferences and talks that will promote critical heritage practice in an international context.

The Rockefeller grant and other funding for the new programme was facilitated by the Cape Higher Education Consortium (CHEC), which coordinates relationships and agreements among the tertiary institutions in the Western Cape.

According to Witz, the money "places the partner institutions in an outstanding position to provide one of the strongest programmes in the field of museum and heritage practice on the African continent".

"We will be able to effectively train heritage professionals who, with critical and analytical abilities, will advance the capacity of communities on the continent," he said.