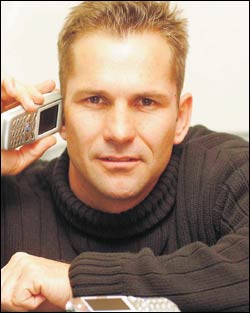 Derek Hume (MBA 2002) says running a start-up business is not all glamour but a huge challenge. And he should know. Resisting the lure of foreign shores and big corporates, the UCT Graduate School of Business alumnus joined Cape Town-based start-up Qeo Wireless as CEO in January. The company has since made headlines by announcing that it has developed a high-tech cellphone that is a first for South Africa, if not Africa, and that is "good enough to take on the best in the world".

Hume, a computer scientist who spent seven years working across Europe and in Silicon Valley, says that it's a big task running a start-up business. "The challenges are huge and you have to deal with a broad spectrum of issues, ranging from the employees to the investors," he says. But, far from wilting under the challenge, he is confident that he has what it takes, and says that the GSB has played a vital role in this. "The GSB was an amazing environment to learn in, there was so much energy, ambition and entrepreneurial flair in the class - it was unique."

Today he feels that he has the skills to handle the demands of the business he heads. "The GSB MBA equipped me in all the areas of this spectrum of issues. It gave me a good grounding and structure to take on the challenges of a smaller, higher risk start-up business," he says.

With a computer science background, Hume found great value in courses such as those in communication learning and leadership, change management and advanced leadership.

Hume says that he was thrilled to join the pioneering project at Qeo.

"When I got involved, I thought, wow! This is very exciting. Cellphones are one of the few areas globally showing a lot of growth and there is a lot of change in the technology."

The new wonder-phone, branded the Q500, took 18 months to research at a development cost of R15-million. Funded by a consortium of local and international investors, it should be on the shelves soon.

In such a competitive sector, Hume says that the Q500's unique selling point is that software, ranging from banking and news to gambling odds and movie schedules, can be added to the phone.

"Information is one or two clicks away. It's almost like going from DOS to Windows." This unique platform will enable organisations that require information to flow between mobile employees or customers to do so using the Q500.

The company, currently refining the phone, has already received significant interest from mobile network operators locally and in Africa, Europe, Brazil, Korea and from companies that want to use it for business applications.

But it's not all international business deals for Hume. A proud South African, he is very happy to be back home in Cape Town where he has bought a house and is enjoying being with friends and family again.