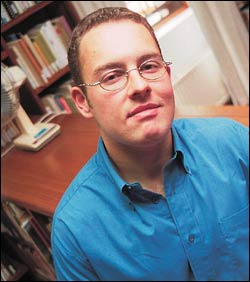 For the birds: Conrad Savy is the winner of this year's Joosub Award at the AGM of the Percy FitzPatrick Institute of African Ornithology.

Rockjumpers, oystercatchers and porcupines - an inter-species cameo - were among the cast of characters that featured at the Percy FitzPatrick Institute of African Ornithology's annual general meeting at the end of October.

The beasts did not put in any personal appearances at the event, but rather made it into the talks presented by students and researchers on the day. Topics covered everything from the origins of Africa's most bizarre birds (Picathartes and rockjumpers) to the evolution of avian life-history, from the GPS-tracking of penguins to the misunderstood role of porcupines in the ecosystem.

A regular on the AGM itinerary is the handover of the Joosub Award, made to the best student on the preceding year's master's programme in conservation biology. Conrad Savy walked off with this year's purse for his work on conserving the endangered Wattled Crane on private land in KwaZulu-Natal.

According to Savy, private land-conservation is critical to the long-term survival of the South African sub-population of Wattled Crane, the largest and rarest of the six crane species that occur in Africa. Savy found that despite positive attitudes, economic considerations - on whether these areas should be retained or not - overshadowed conservation concerns.

"The magnitude of opportunity costs, the largely economic basis for conservation behaviour and low levels of participation in existing private conservation designations indicate the need for alternative approaches," he noted in his thesis. Adequate support from local government would be essential, however, regardless of what form these alternative approaches might take, Savy added.