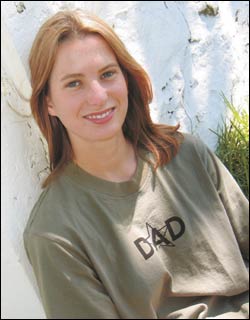 DAD's girl: Caroline Botha's website project on a father she never knew explores the nature of memory and identity.

Fourth year Michaelis School of Fine Art student Caroline Botha's new media project is named simply DAD. It is a poignant exploration of her father's identity and his elevation to the status of a celebrity, via a website she designed as a metaphorical framework to explore issues of construction, identity and memory.

The idea might sound quirky, except that Botha's father, a pilot, died in a helicopter accident when she was only two. She has scant memory of him. "I came to know my dad by sifting through his belongings and family photos," she added.

Although Botha knew what he sounded like (through recordings), what he looked like (through film), what he wore and what he enjoyed doing by listening to her mother's memories, she didn't experience a relationship with him. "There was no emotional connection. My ideas were formed through other people's perception and memories, much the way a fan gets to know a celebrity."

In her mind, DAD was brave and strong, an amazing man who could do almost anything. "My perception of him was obviously an inflated one, and one still very much informed by a childhood perspective," she said. "It is also a fan's perception of a celebrity. Similarly, the personas of celebrities are largely constructed by the media and bear little resemblance to the actual people."

Her work this year focused on transforming DAD into a star. She designed a website, on the surface like any other celebrity website, but with differences.

To underpin DAD's status as a celebrity, marketing the website formed an important component of the project. Dipping into a materials grant she won last year, Botha produced DAD posters (pinned up all over campus), produced free postcards, flyers and T-shirts with the DAD logo (the word printed on the emblem of a star), which she sold.

The website works like any other celebrity website, with links to a trivia quiz, magazine articles, movies, a shopping cart for the e-shop, and even one on fashion, modelled on the clothes DAD wore. There is also an auction page, with items that belong to DAD, a pistol, a diving knife, a watch – Here Botha was interested in determining how worth is attached to objects. "Do his belongings have a worth beyond their sentimental value?" she asked.

"Before this project I didn't feel connected to my dad. Now, interestingly, I sense that a person is connected to the name DAD. He has been part of my daily life for most of this year. While it might be unconventional, and ironic (in view of the premise of the project), the word DAD now has meaning and substance."

For the purpose of the exhibition, Botha also made a plaque in memory of her father, in addition to the one fixed to a church bench. "The website will not be exhibited in the same space. Instead, it can by accessed only via the Internet. In this way, I want to emphasise the ephemeral nature of both memory and the medium in which I have chosen to address it."

It was, she says, a "brave project, one her supervisors initially approached with reserve. "It's very personal and a website is very much in the public domain," she added. But she has been gratified by the good feedback.

What would DAD, Stanley Leonard Botha, think of her endeavours to recreate him? She contemplates the question. "I hope he'd have been proud. My mom was very touched and loved the idea." (The web address is: www.michaelis.uct.ac.za/dad.)