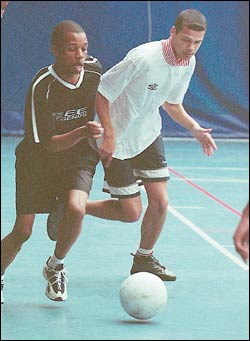 Glory bound: Anthony Mpati (middle) of EEE Legends gets away with the ball during the indoor soccer final between EEE Legends and Another Team. EEE won this contest 2-1.

Another Team - that's a team name, in case you're confused - came close to bagging two titles in this year's indoor soccer five-a-side knockout championships, making it to the finals of both the Super 16 and the open events.

Alas, the side had to settle for only one trophy, beating Shaolin Styles 3-1 in the Super 16 finale after trailing 0-1 early in the match. Junaid Moosa, Peter Shields and Dusshantha Anandakumar scored for Another Team, while Jerome Hufkie netted Shaolin Styles' lone goal.

Playing in the open final the next day, Another Team came off second best to EEE Legends, losing 1-2. Julie Roufurd opened the tally for EEE, with Shields quickly equalising for Another Team.

Roufurd then got his second goal of the match, taking the score to 2-1 for EEE. Despite some good goalbound shots from both sides, the scored remained this way until the final whistle.