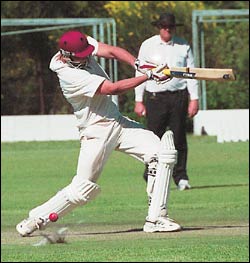 Smashing cricket: UCT's Doug Worth blasts the ball on his way to 50 off 50 balls in the game against United.

The UCT cricket first team, both 2002/2003 Western Province first division 1A league and knockout champions, is off to a promising start in its 2003/2004 campaigns.

After a draw in its first league game against Almar - the team that finished second on the log last season - UCT finds itself in good positions in its two-day games against Primrose and United. On Saturday, October 18, the side batted first against Primrose, declaring on 213/9. Primrose was limping along at 130/9 at the end of the day's play.

The match continued on Saturday, October 25.

UCT then took on United on Sunday, October 19, and whittled their rivals out for 184. Openers Doug Worth and Chris Vadas took the game to their opponents in the UCT innings, scoring a brisk 87 before Worth - suffering what appeared to be either cramps or a pulled hamstring - was bowled for 50, bludgeoned at exactly a run-a-ball.

UCT eventually declared at 243 for eight, and United started their second innings on Sunday, October 26.