Men's hockey side is the best in the country 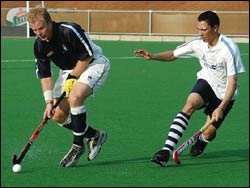 On his way: Charles Stuart (in blue) makes his way past a UPE player in UCT's 5-0 win over their Port Elizabeth rivals. Picture courtesy of Jackie Wiese.

It's official - the UCT men's hockey first team is the best club side in the country.

The squad earned this distinction by winning - for the first time in the club's history and on its third attempt in three years - the national Club Champion of Champions title, contested in Pretoria from September 24 to 27. The event, staged at the Tukkies Astro-turf, brought together all the league-winning clubs from around the country.

UCT qualified for the competition by snagging the Western Province Hockey Union (WPHU) Grand Challenge Trophy a few weeks back.

In the Pretoria contest, UCT went up against defending champions Wanderers from Gauteng in their first match, winning a hard-fought tussle 3-2 after leading 2-0 at half time. Spurred on by this famous victory, the side marched on to a 7-2 win over Parkside (Border) and a 4-1 defeat of Tukkies (Northerns).

UCT bounced back for its final game of the round-robin format, however, trouncing University of Port Elizabeth (Eastern Province) 5-0 to finish on top of the log and secure the South African title.

The trademark of UCT's performances at the tournament was the side's dominance in all areas of the game, reported team coach and UCT lecturer Pierre le Roux.

"The defence unit of Paul Blake, Charles Stuart, Mark Holness and Andrew Cronje, alongside keepers Simon Martin and Mark Pitterman, thwarted numerous attempts from opposition forwards. The skill and talent from the midfield combination of captain Ian Symons, John McInroy, Dave Viney, Adam Wilson, Dylan Ball and Craig Ross proved to be a headache for opposition, often turning the defensive work of the defenders into counterattacks and goal opportunities at the other end of the pitch.

Du Prez, whose goal-scoring and circle-entry skill thralled spectators, produced one of the tournament's sterling performances, added Le Roux. In addition, the short corner combination of McInroy, Blake and Symons proved to be clinical and deadly effective in converting short corners, while rattling the confidence of the opposition's defenders.

This title ends off a bountiful year for the UCT hockey side. Under Le Roux's guidance (WP under-21 and South African Tertiary Institutions coach), the students bagged the Western Province indoor title, the Western Province Grand Challenge league, and, of course, the Champion of Champions title in 2003.

The team also narrowly lost in the final of the SASSU tournament (they did not, as mistakenly reported in Monday Paper a few weeks back, in fact win the SASSU games; what with all the side's triumphs, we got a bit muddled). "The achievements of this team can be attributed foremost to the passion, commitment and work ethic the players have developed from the beginning of the year," observed Le Roux. "No hockey team in the country works harder than this one and it is only fitting to see them being rewarded through their achievements."

Following their Pretoria coup, the UCT team will represent South Africa at the African Club Championship in Kenya in April 2004.