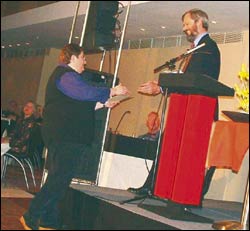 The award is given as recognition from medical and nursing peers, for contribution and nursing excellence in the field of critical care.

Fouche received the prestigious award at a congress dinner on August 27, held at the Arabella Sheraton in Cape Town. The event was attended by the combined societies namely, The South African Thoracic Society, the Critical Care Society of Southern Africa, and the Allergy Society of South Africa.

Lecturing critical care nursing and applied nursing practice at the School of Health and Rehabilitation Science, Fouche is an active member of the Critical Care Society of Southern Africa. She also chairs the Western Cape branch, and is the only nurse member on the council.

"It can be quite daunting when you are the only voice for your profession," said Fouche.

Fouche was nominated for the award by a paediatrician.

"I do not nurse anyone under 40kg, though," she said. "Nursing kids is a specialty all on its own."