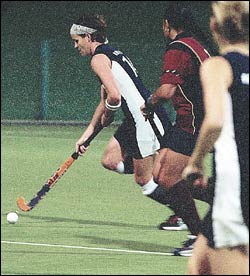 The women's hockey first side ended their season on a high by securing third place in the Western Province Hockey Union (WPHU) league after beating Bellville in a thrilling goal chase at Hartleyvale last Wednesday evening.

The side went into the match - their final one for the season - needing five points to finish in third spot. This meant that they had to both win the match (four points) and score at least four goals for a bonus point.

The team was slightly off the mark by halftime, leading by a lone goal by Lauren Seaman (1-0).

The first 10 to 15 minutes of the second half proved frustrating as UCT was unable to break down the Bellville defence. Then followed a horrid three-minute passage in which Bellville first equalised, and then went ahead (1-2).

One would have forgiven UCT for throwing in the towel and resigning themselves to fifth place on the log, but team captain and national player Kerry Bee had other ideas. Bee, after another of her predatory runs down the middle of the pitch, quickly scored an equaliser (2-2) and opened the floodgates for UCT.

She was on hand to steer the ball into the Bellville net (3-2 to UCT) after a cleverly worked penalty corner that involved four snappy short passes in the Bellville goal area. With ten minutes left on the clock, she rounded off her hat trick with another long run and a scorching shot past the Bellville goalkeeper.

Leshane Luscombe netted UCT's final goal (5-2) minutes before the final whistle. According to Bee, the win was definitely one of the highlights of the side's 2003 campaign.

"We had set ourselves the target of finishing third again this season, as we did last year. So we were very chuffed about reaching our goal."