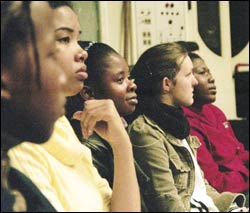 The usual suspects: (From left) SRC candidates Nomsa Mazwai, Valerie Carmichael, Nompumelelo Motlafi, Katy Hindle and Lettah Selomane face up to their constituency at the first of last week's question and answer sessions.

Building on a 39.9% turnout of voters at the 2002 campaign - the highest in the country and in the history of the institution - last week's run-up to this week's Students' Representative Council (SRC) elections was as heated as ever, featuring a heady cocktail of rhetoric, cant and celebrities.

The 2003 race, at one stage boasting 28 candidates (a couple have since fallen along the wayside), began in earnest last week with an official launch at Jameson Plaza on Monday, September 1. The rest of the week was dedicated to the customary question and answer sessions, where nervous candidates had to field some tricky posers from their fellow students.

Featured among this year's contenders was Phandle Phandle, who became the first blind student to stand for a place in an SRC executive committee at UCT. Another highlight is the increase in the number of women candidates, who this year make up 43% of the pool, compared to a lowly 15% in 2002.

The election organisers (the Student Development Office and the current SRC executive) also, as usual, invited a procession of television personalities and politicos to chair or speak at the interrogations. Last week's luminaries included e.tv newscaster Udi Ya-Nakamela; Naledi Pandor, the chairperson of the National Council of Provinces; Bantu Holomisa, president of the United Democratic Movement; and Helen Zille of the Democratic Alliance.