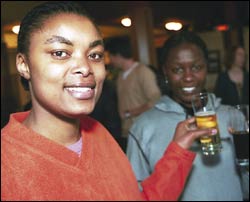 Greetings neighbours: (From left) Bongile Dlamini and Miracle Ntuli are two of the southern African students on the inaugural run of a new collaborative doctoral programme in economics.

Eight southern African students, the first on a new taught, full-time doctoral programme devised to boost the number of economics researchers in the region, have started their four-year slog of core courses, electives, fieldwork and theses.

The eight, hailing from Botswana, Swaziland, Tanzania and Zimbabwe, make up the maiden intake of a collaborative programme between UCT, Wits University and umbrella organisation, the African Economic Research Consortium (AERC), in Nairobi, Kenya. The AERC, which handed scholarships to six of the eight students on this first run, offers similar programmes elsewhere in sub-Saharan Africa, aimed at strengthening research capacity in the region.

The students will first work their way through a sequence of core courses - in microeconomics, macroeconomics and the like - at UCT over the next year, before heading for the AERC's Joint Facility for Electives (JFE) in Nairobi for four months. Here they will tackle their respective electives and exams. After their stint in Kenya, the students will retire to their host institutions (six of the eight are enrolled at UCT, the other two at Wits) for fieldwork and to write up their theses.

The core courses and the electives are, while not unique, certainly an unusual addition to doctoral studies, explained Professor Melvin Ayogu, course convenor at UCT's School of Economics. Introducing these elements does, however, make for more rigorous control over the programme, he noted.

"Whereas with the normal PhD programmes students would have had to arrive at the frontier of these [core and elective course] topics on their own, they now do so in a structured environment. Because learning is facilitated, their capacity to absorb is enhanced, and the likelihood of achieving a higher throughput as well."

And the students are settling in nicely, although the course is certainly testing their resolve.

"It's a lot more work than I expected," said Sheshi Kaniki of Tanzania. "I did expect a PhD programme that would be rigorous and very intense, and that's exactly what it is - it's tough, and it's hard work," he continued. "It's the hardest that I've ever worked in my life, but it's really good."

There is of course the added angst and responsibility that comes with being the programme's trailblazers, as Swazi Bongile Dlamini pointed out.

"You don't know what to expect," said Dlamini. "And you also have to set the standards for the students coming after you."