New York waits in the wings for budding jazz diva 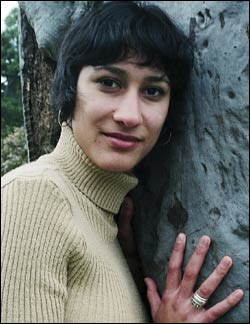 Jazz singer: UCT alumnus Abigail Petersen has won a major scholarship to study abroad."I can do what I love while seeing the world."

A whopping R120 000 SAMRO overseas scholarship for winning the jazz vocal section in Johannesburg recently is just what UCT graduate Abigail Petersen needed to put her career firmly on an upward trajectory.

And the additional R10 000 De Waal Award she pocketed at the same time will take care of the extraneous needs like books, microphones and the like.

Petersen graduated in jazz, voice and composition and taught at the university part-time for three years before leaving to fulfil her singing aspirations.

But her plans to take up the prestigious scholarship have been put on hold until the singer has completed a two-leg musical tour; six months in Europe and two in Australia. She will take up the SAMRO overseas scholarship in 2005 and plans to fly to New York, the hotbed of world jazz.

"I cried when I heard the news. I didn't know I would win," said the singer, who described her ambition as a fight to fulfil a dream.

Petersen sang her way through the jazz, pop, Latin and indigenous categories, choosing her own compositions (Until the Stars Fall from the Sky and There's no Tomorrow) for the latter.

Music has been part of her life since she began playing the piano (bought for her elder sister, who is an accomplished classical pianist) as a four-year old in Grassy Park. It was clear the youngster was talented and she began official piano lessons at 10 and took music at school. It was only when she took a jazz course at UCT's South African College of Music that the budding artist realised where her real talent lay.

She took voice as a second subject and began singing at gigs at 17.

Petersen's strengths as a vocalist steadily eclipsed her skills as a pianist, though she does still occasionally play and sing.

"I immersed myself in jazz," she laughed. "Ella Fitzgerald was a huge influence."

Petersen has recorded two original tracks on the Johnny Walker Jazz Impressions CD, which will be launched at the Kilimanjaro Club in Johannesburg on September 14.

"I want to be a performing and recording artist in the long run and I see the European trip next year as the perfect opportunity to knock on some doors and present some of my original material. If they don't like it, that's okay. It's part of growing. There will be other opportunities," she reflected.

And few who have heard the singer in full stride will doubt that.

(Another UCT graduate and jazz singer, Nonthutuzelo Puoane, was runner up in the SAMRO overseas scholarship finals.)