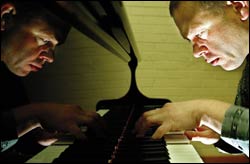 Inspired by a performance of Roger Smalley's Variations on a Mazurka of Chopin, in which the Smalley work connects without a break to the original Chopin, Associate Professor Graham Fitch, head of keyboard studies at UCT's music school, decided to commission more works of a similar nature.

He had to look no further than South African College of Music (SACM) colleagues Associate Professor Hendrik Hofmeyr and Professor Peter Klatzow.

Fitch returned two months ago from the 6th Australasian Piano Pedagogy Conference in Melbourne where he presented a keynote address entitled South African Piano Music: An Overview, and premiered the brand new pieces to critical acclaim from the Melbourne press.

The recital programme was repeated recently at the Baxter as part of the SACM concert calendar.

"I found the music as well as the idea compelling," said Fitch. "So I decided to commission several composers to write sets of variations on Chopin Mazurkas.

"The interesting thing is that each composer had no idea how the others were handling the variations. The only mandate was that they choose a different mazurka," he explained.

A mazurka is a rustic dance that originated in Poland and which Chopin elevated into high art, writing over 60 for the piano.

In addition to the works by Hofmeyr and Klatzow, the recital programme also included a set of variations by New Zealander Jack Body, and according to Fitch the idea has aroused the interest of other composers.

"Playing and teaching in Cape Town, New Zealand and Australia, I have been struck by the sheer quality of music being written by composers who, as yet, are known by a relatively small audience," he said. "I hope this 'Tri Nations' portfolio of compositions will help make audiences more aware of what is being written today in our countries."