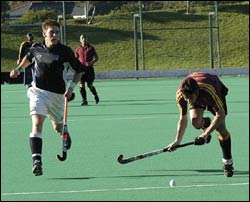 The UCT men's first team is closing in on its third consecutive Western Province Hockey Union's (WPHU) Grand Challenge trophy, but, as in the previous two years, have to win the final match of their season to land the silverware.

The side made sure the season would go to the wire when they beat the University of Stellen-bosch 4-2 on Saturday, August 30, and then pummelled the hapless Central B in a 9-0 romp the following Wednesday (September 3).

The team now goes up against Central A (the match was played this past weekend, too late for a report in this week's edition of Monday Paper), to whom they lost 0-2 in their first-round encounter this season at Vygieskraal. But the side is optimistic, boasting a very good home record against their rivals.

Goalmouth scramble: Ian Symons (left) was one of UCT's scorers in their recent 4-2 win over the University of Stellenbosch.