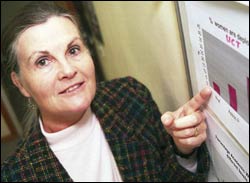 Leading the way: Lesley Shackleton is forging ahead with a new, international gender equity in higher education project.

Addressing an audience of mostly women (there were only four men in attendance) at the August 11 Open Planning Forum, Lesley Shackleton spoke about the new, two-year international Gender Equity in Commonwealth Higher Education project.

Aiming to map interventions for gender equity in leading universities across five Commonwealth countries, the project will not only address access for women students in non-traditional areas such as engineering, but also staff development and gender mainstreaming in the curriculum.

According to Shackleton, the study, which is funded by the United Kingdom Department for International Development and the Carnegie Corporation, will also look at women professional and support staff who are significantly under-represented at senior levels.

"The project hopes to identify examples of best practice across Sri Lanka, Nigeria, Uganda, Tanzania and South Africa," she said. "From this we hope to suggest strategies which will influence policy and improve gender equity in higher education."

Shackleton presented statistics for UCT showing that of all women academics at the university in 2000, only 8% were full professors. In sharp contrast, 35% of male academics were full of professors.

"Women make up only 15% of UCT's Senate and 29% of its Council, but the most shocking statistic shows that only 3% of UCT Fellows are women," she added.

UCT will be the case study institution for South Africa, and research will be carried out by a HERS-SA team under the guidance of Deputy Vice-Chancellor Associate Profes-sor Cheryl de la Rey.

There are also two doctoral students attached to the project, which is co-ordinated by the Institute of Education at the University of London.

The project's researchers will examine the social processes and policy frameworks associated with gender equity interventions that universities have put in place, and the effects these have had on organisational and institutional strengthening.

It will also investigate the extent to which these initiatives are sustainable and consider how gender interacts with other forms of inequality, including social class and ethnicity. Shackleton concluded her presentation by commenting on the scarcity of men at the discussion, and questioned whether gender equity was only a women's issue at the university.

She is looking for information about past and current initiatives to mainstream gender in the UCT curriculum. Any UCT person with knowledge of these initiatives is asked to contact her on 650-2822/3740.