Giving his right arm for UCT 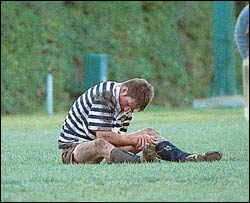 Broken dreams? An injury incurred during UCT's game against Durbell may have put paid to Bobby Skinstad's dreams of playing for the Springboks in the upcoming Rugby World Cup.

Their 57-34 rout of Durbanville-Bellville on Saturday, August 9, broke a seemingly interminable dry spell for UCT Ikeys, but sadly the result was overshadowed by a late second-half injury to Springbok contender Bobby Skinstad.

A fractured bone in his right forearm will have Skinstad out for four to six weeks, and has just about dashed his hopes of donning Springbok colours in the World Cup in Australia, which runs from October 10 to November 22.

Playing in the final of two games for UCT as part of his get-match-practice programme, Skinstad was enjoying a much better outing than a sluggish one against Collegians the week before, but with about 15 minutes to go, he sat up from a tackle gingerly holding his right wrist. Although he played gamely on for a few more minutes, Skinstad left the field shortly before the final whistle.

Save this late setback, Ikeys had much to celebrate on the day, running in nine tries in the match (including one by Skinstad), a tally that belied the mushy, slippery underfoot conditions. Anthony 'Animal' Roberts started the UCT haul, notching up a hat trick inside the first 15 minutes.

Ikeys' victory margin should have been a much more substantial one, but poor discipline in defence allowed Durbell to touch down four times and earn themselves a precious bonus point.