Class reaches out with guidance, advice and cash 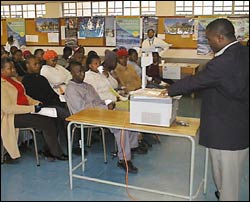 The information day featured presentations by staff from UCT (specifically AIM class member Nawaal Boolay of UCT's Undergraduate Funding Office [UFO]) and Peninsula Technikon's Social Respon-sibility Office. In addition, a number of AIM students, as besought by the class committee, secured sponsorships from their respective companies for a series of career stands, staffed by class members.

The career day was proposed by AIM class and committee member Funeka Plaatjie, an HR manager at Monviso Knitwear. Plaatjie, who hails from the area, had previously - on her own initiative - run similar information sessions in Langa.

"We wanted to tell students of our experiences and what we had gone through to get where we are today," said the class's committee co-ordinator, Ingrid Kalie, a management consultant at PSP Icon). "We wanted to tell them that it's not always easy out there, but that they can - like us - succeed and achieve something."

As such, the Langa event will also feed into the second of class's bundle of projects. The sponsorships for the stands - R1 000 per stand - will go towards a scholarship fund. The class hopes to raise R25 000 for this scholarship, which will be awarded to a suitable candidate - the class will decide on criteria alongside the GSB - on the School's 2004 AIM programme.