Farewell to UCT's own Peter Pan 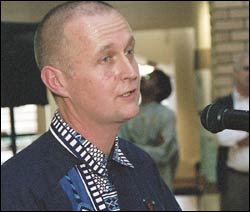 A parting of ways: Frank Molteno shares a few words of farewell.

One the eve of his 50th birthday and after just over 30 years as student, academic and administrator at UCT, Frank Molteno - dubbed by Deputy Vice-Chancellor Professor Martin West as "a Peter Pan of UCT" for his enduring youthful looks - bade farewell to colleagues and friends as he took early retirement at the end of July.

At a special farewell occasion hosted in Molteno's honour, university officials and administrators, council members and a horde of colleagues and associates fÃªted the former employment equity manager. Molteno, as West pointed out at the event, first came to UCT in 1971, and over the next couple of years notched up an enviable array of academic accolades (a BSocSci with distinction in sociology, as well as first-class honours and master's degrees with distinction in the same subject).

After lecturing in sociology for nearly 20 years, Molteno was appointed as UCT's first equal opportunity manager, a selection that raised a few eyebrows. But not those of former Vice-Chancellor Dr Mamphela Ramphele, who, West recounted, remarked smartly that: "We did not hire a white male - we hired Frank Molteno."

After a short stint as human resources advisor to the Faculty of Health Sciences, Molteno recently decided to take up early retirement. Heeding the call of his faith, he will - for the next three years at least - work for the Anglican Church's HIV/AIDS programme, serving in its 23 dioceses across a number of southern African countries.

"It has been an enormous privilege and an absolute pleasure to have served UCT over these many years," said Molteno. "Yes, I have given my heart and soul to UCT, but how UCT has reciprocated.

"It has given me just so incredibly much - a community of colleagues, a family of friends and a place where I could continue learning and growing for more than 30 years."

Many at the university, if their praises are anything to go by, will sorely miss Molteno. "Frank is a real mensch," said the human resource information and systems manager, Miriam Hoosain, who worked with him at the Employment Equity Unit.

"I don't think I've ever had a better manager or mentor. He always has other people's best interests at heart, and I've never seen anyone who develops other people as much as he does."