All hail the sporting men and women 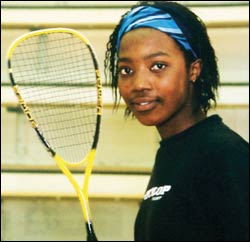 A flurry of national sporting caps have come UCT's way over the past few weeks.

Hockey: Paul Blake, John McInroy, Ian Symons and Dave Viney were selected for the SA men's A-side for, among other clashes, recent engagements against the national senior men's side (drawing the three-match series one-all), before beating the Zimbabwe national team. This is the first time that UCT has boasted four players in a national hockey squad.

In turn, Dylan Ball, Andrew Cronje, Matthew McConkey and William Tsolo were named for the SA student team, while UCT men's coach Pierre le Roux, a senior lecturer in the Faculty of Engineering and the Built Environment's academic development programme, was appointed to take charge of the team. In addition to their contests against the SA A-team and Gauteng, the side also won both games in their two-match series against Zimbabwe.

Tammy Kruger was the sole emissary from the UCT women's side to make it into the national women's student team.

Squash: UCT women's champion Siyoli Lusaseni has made it into the SA student team and onto the national student executive. Last year, Lusaseni became the first UCT player to be selected for the national open squad.

Marco Bekker was also chosen to represent UCT in the SA student team.

Rowing: Sam Pearson rowed for the national under-23 four in the world championships in Yugoslavia at the end of July. The team finished in an inspired fourth place (7.34:95) out of the 16 boats in the event, coming in less than a second after the third-placed Polish side (7.33:20).