Fred, at your service, ma'am 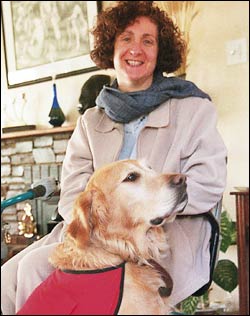 Professor Fred, as he is colloquially known to all and sundry, does not hold with tutorials. Lectures, quite frankly, are a tad boring (too much waffle), and libraries, well, far too stuffy and soporific.

Prof Fred Huggins (DHH) likes to conduct his research at the coalface, in situ, so to speak. He is after all, an expert on human nature. And dosing in the sun on campus affords him a jolly good vantage point from which to view a whole range of human action. Not that he gets much time.

Today, the professor from Nonesuch University is busy, employing the skills he learnt "just out of puppyhood" at the South African Guide-Dogs Association. Professor Fred is great golden retriever who has been trained to assist UCT alumnus and author Lauren Singer (many will remember Singer from her days in the former Russian studies department).

He is also the main character of a delightful book, Fred, at your Service, Ma'am, that Singer has written about her life with multiple sclerosis (MS). The story is educational, inspiring and poignant and is told through Professor Fred's eyes, with the restraint of an intuitive author. Through Professor Fred's sensibilities a painful subject is made light and approachable, a precious balance.

"You can't be maudlin or pedantic as a dog," she notes with candour.

Singer has also written A Measure of Time about her life with MS. Determined to remain active, Singer, who now gets about in a wheelchair, is also an occasional consultant for the UCT Disability Unit. She also teaches first-year health sciences students about living with MS.

"I teach them the difference between curing and healing," she remarked. "You can't always cure a person, but you can help heal them within." It is a valuable observation in a country where HIV/AIDS, in particular, will demand more from medical graduates than ever before.

But Professor Fred is her mainstay; a service dog (as opposed to a guide dog, which assists blind people) who can fetch and carry; opening cupboard doors and even the fridge (though Singer laughs uproariously at the idea of any savoury morsel making it beyond the door in the clutches of Professor Fred - restraint is a human skill he is still learning).

Right now the canine with an academic alias is asleep on the carpet at Singer's side. Chocolate cake is being offered and he is instantly awake, senses bristling. Within seconds his great head rests on the table, his eyes rolling pleadingly, desperately in the direction of the confectionery. He is not permitted to indulge (he must not sully his service skills by learning to beg). But he may eat the serviette. Professor Fred (like many academics) has eclectic tastes you see; he has a penchant for tissue paper.

"Serve with honour and pride my son," Professor Fred's mother tells him in the opening chapter, as he is about to leave his dog family to become Singer's companion.

(The book is published by Spearhead and is available from Exclusive Books and Wordsworth or from Singer (at R80), tel 683-3545. It is also available on a double CD (brilliantly narrated by Singer), for the same price. There is a planned book signing ceremony at the Centre for African Studies at lunchtime on August 11.)