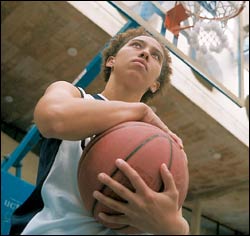 Aiming for the sky: Kornelia Semmelink will be the only UCT player to represent South Africa at the 2003 World Student Games in South Korea.

She shrugged off two debilitating knee injuries to earn herself a deserved place in a major international basketball competition, but injury troubles done with, UCT's Kornelia Semmelink now has 10 000 new obstacles to hurdle.

The 22-year old business science student will be the sole UCT emissary to join (knee guard and all) 10 other South African university, technikon and college students in the SASSU squad for the 2003 World Student Games (also known as the 2003 Summer Universiade or the World University Games) in Daegu, South Korea, at the end of August. Only problem is, she needs another R10 000 (of an initial R16 000) to book her ticket for the trip.

Now a stalwart of the UCT women's team, Semmelink first joined the University squad as a Westerford High matric student in 1998. Although she spent most of that year following the matches from the bench, she bided her time and, when she officially came on board as a UCT student, soon became a regular in the side.

Since then, Semmelink's been the pick of the UCT basketball gallery, with a train of provincial caps to her name.

It was while with the Western Province side at a national championship in KwaZulu-Natal in December last year (in the first two minutes of the first game, actually), that she suffered her initial knee injury. Sidelined for the rest of the tournament, she was on crutches for about a month and a half following an operation to the knee (cartilage had to be scraped off).

Semmelink eased her way back into things (plenty of gym time), but hurt herself again in her comeback game for UCT in May. She recovered in time for the SASSU Games, however, as well as a training camp for the Universiade squad, both in early July.

But for the impassioned entreaties of the team's assistant coach, Phillip Coki, Semmelink's injury almost kept her out of the Universiade (the head coach was understandably reluctant to include a player, merits notwithstanding, nursing a gimpy knee in the squad).

Injury and selection troubles overcome, a now-fit Semmelink has to turn her mind to her financial demands (UCT pitched in for R2 000). Keen as she is to rubber-stamp her first national cap and her passport for her first trip overseas (Asia holds a special appeal), she admits to being at a loss as to how to go about raising the rest of the money.

But, with the rest of the team, she's not taking her eye off her goal - making it to Korea. And as the team's been at the wrong end of some heavy thrashings at previous Student Games, all the SASSU players harbour one (modest) ambition.

"We want to win a game," Semmelink announced with a laugh. "Just one game."