UCT-linked finalists vie for Woman of the Year title 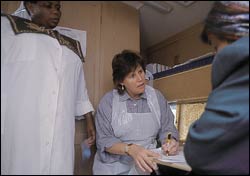 Two women with UCT connections are listed among the finalists in the Shoprite Checkers/SABC2 Woman of the Year Award. They are Professor Lynette Denny (gynaecology and obstetrics), who has been nominated under the science and technology category, and the DA leader in the provincial legislature, Helen Zille, a former director of UCT's communication department, who has been listed under the education category.

They are among the 24 finalists in eight categories, which also include sport, community affairs, arts and culture, business entrepreneurs, health, and media and communications.

The winner will be announced at a gala event on July 31 at the new Cape Town International Convention Centre. The award has been designed to coincide with activities leading up to National Women's Day on August 9.

Interestingly, Denny has not been included in the health category but in science and technology, the latter a new section for role models who are "paving the way for women researchers, scientists and mathematicians".

Her nomination reads: "Professor Lynette Denny has saved the lives of countless women through her commitment to combating the spread of cervical cancer in disadvantaged areas. Having started community-based research in 1996 with $US40 000, the viability of the project today justifies $US750 000 in annual funding. Her most recent success is the discovery of an alternative test to the traditional 'pap smear', which, once implemented, could save a quarter of a million lives annually."

It continues: "Prof Denny's counselling skills, outreach programmes and research successes over the years have earned her many awards for combating violence against women and children, benefiting disadvantaged communities through research. She is widely published and has recently embarked on a funded three- to five-year study to assess the cost of rape to South Africa, by closely screening its effects on the lives of rape survivors."