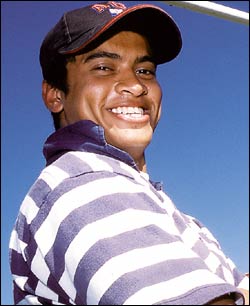 Star turn: Isma-eel Dollie was voted player of the tournament at the recent SASSU national rugby week in Pretoria.

The UCT under-25 team wowed crowds at the South African Student Sports Union (SASSU) national rugby week in Pretoria in late June - the side was voted the team that played the most attractive rugby throughout the event, while Isma-eel Dollie was named player of the tournament.

Dollie, one of the SA under-19 stars during its triumphant campaign at the World Championships in France earlier this year, scored 24 points in UCT's upset of co-hosts Pretoria University in their first match. The side surprised Tukkies in a convincing 38-13 win.

The squad's Vokai Hove was named player of the day.

A few days later, however, UCT went down 24-32 against Shimlas (University of Free State), throwing away a respectable 24-14 half-time lead. Dollie notched up another 14 points to his tournament tally, while Rory Matthew earned the player of the day nod.

The team bounced back on their last outing, beating hosts Pretoria Technikon by 40-34 in the tournament finale, with Dollie and his SA under-19 captain, Paul Delport, putting in solid performances.

UCT was seeded second after the games, while the Rand Afrikaans University (RAU), the tournament's only undefeated side, took top spot.