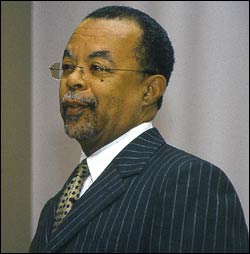 Mission possible: During his visit to UCT last week, Prof Henry Louis Gates chronicled his 25-year campaign to get Encarta Africana, the "black Encyclopaedia Britannica", off the ground.

One of the primary purposes of Gates's visit to UCT was to catch up with the University's cadre of past and present Harvard-Mandela Fellows who have already or will soon be spending time at Harvard's WEB Du Bois Institute for Afro-American Research, of which he is the director.

While Gates's dinner with the Fellows was a relatively sedate affair, it was in his two-hour session at the Centre for African Studies on Microsoft's Encarta Africana, the four year-old encyclopaedia of black history and culture, that his virtuoso oratory skills were on display. It was Gates's energy, ambition and determination that helped him get Encarta Africana, a venture first proposed by influential African-American educator WEB Du Bois way back in 1909, off the ground.

Working alongside equally well-known Harvard colleague, Professor Kwame Anthony Appiah, it took Gates close on a quarter of a century to turn the encyclopaedia from concept ("a black Encyclopaedia Britannica," he once called it) to fast-selling product. It was an odyssey, he explained with gusto and humour last week, that spanned 25 rejection slips, umpteen failed presentations, cranberry-juice-and-vodka cocktails with Quincy Jones in the music legend's Bel Air home, oddball suggestions ("turn it into a game"), and deal-clinching proposals to Microsoft executives and a financier keen to find a big project with which to launch his publishing empire.

The encyclopaedia was finally released in 1999 in book form by Basic Civitas Books as Africana: The Encyclopaedia of the African and African-American Experience, and on CD-ROM, as Encarta Africana by Microsoft. Today, the annually-updated (the fourth edition is currently available) CD-ROM features 1 000 web links, a Library of Black America, a chronology of the civil rights movement, an African-American music timeline (see and hear Jon Coltrane and Miles Davis perform together), write-ups on historic sites of Africa, as well as interactive maps and virtual 360-degree tours of these and other locales.

In putting the encyclopaedia together, Gates had to jettison a number of cherished scholarly tenets, he informed the CAS gallery with some un-scholarly glee.

"I did not care about these larger theoretical issues - I just wanted to get together a group of people who would finally put between two covers as much of the knowledge as we have of persons of African descent," he said.