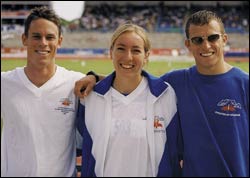 Medical students James Stutterheim, Liska Meyer and Divan Augustyn are having a good sporting year having recently earned themselves places in the Western Province under-23 and senior squads that participated at the SA Senior Track and Field Championships in Port Elizabeth at the end of April.

Triple jumper Meyer, a third-year physiotherapy student and the vice-chairperson of the UCT Athletics Club, finished sixth in both the SA under-23 and seniors events, and is currently ranked in the same position in the country for 2003. Meyer is also a Western Province under-23 champion, and set a new UCT women's record of 11.78-metres at the SA Junior Champs in Pretoria.

Augustyn, in the second year of his physiotherapy studies, went up against one of the strongest 400-metre hurdle fields in the world (South Africa has a disproportionately high number of 400-m hurdlers in the top ten world rankings) in PE, and came heartbreaking close to a place in the finals. Currently the Western Province under-23 and senior 400-m hurdles champion, Augustyn also set a new UCT record of 51:41 for the event this season.

Stutterheim, a second-year MBChB student who had earlier won the silver medal at the WP under-23 championships, also came close, but missed the final of the PE senior 800-metres race by one position.