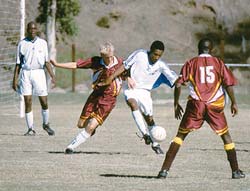 The precious is mine: UCT's Charles Sithole (with ball) wards off a Stellenbosch challenger.

The women's squad proved to be the cream of the UCT sides taking part in the first round matches of the SASSU-Western Cape soccer tournament, held at the University of the Western Cape over the long-weekend of April 26 to 28.

The women enjoyed a goal feast at the event, netting 13 goals in their four games while conceding only one. Apart from a one-all tie against the hosts, the side pretty much had things their own way for the rest of the weekend.

They comfortably beat Cape Technikon 3-0, went one better in their 4-0 victory against Stellenbosch, and whipped a handful of goals past the Peninsula Technikon goalkeeper in a 5-0 triumph. The also claimed the walkover points when the Tygerberg team failed to pitch for the tournament.

While perhaps not as bounteous as their female counterparts when it came to breaking down their rivals' defenses, the men did put in a couple of memorable performances over the event. Losing 0-1 against reigning champions UWC, they then fought well for a share of the points in one-all draws against the Cape and Peninsula Technikon sides.

They also beat Stellenbosch 1-0 in a hard and windy encounter, and, like the women, claimed the points from the no-show Tygerberg match.

The event, as usual, serves as a showcase for individual players as the tournament is used to select the SASSU regional teams (men and women) to represent the Western Cape at the SASSU Winter Games in Bloemfontein in July.