Honouring the Babel of UCT languages 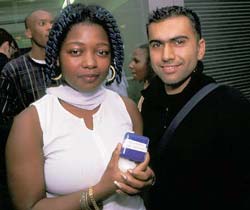 Many languages: Julia Matshikiza (left) of the Italian section and Sunil Osman of the Afrikaans section were among the winners at the School of Languages and Literatures' recent awards ceremony.

The newly-formed School of Languages and Literatures recently honoured its top performing undergraduate students with an array of class medals and other prizes.

At the recent awards ceremony, the School presented its inaugural array of medals and book prizes to students who excelled in its various programmes. The event - as in previous years - boasted a cavalcade of guests, including the consuls general of France, Greece and Italy, as well as regular Richard Smith of Deloitte Consulting, a longstanding sponsor of the awards ceremony.

It is likely that the School will be handing out even more medallions soon, as a boost in numbers appears in the offing. Dean of Humanities, Professor Robin Cohen, indicated at the gathering that there is much interest in establishing Arabic (which ran an introductory course at the 2002 Summer Term), Portuguese and Spanish sections in the near future.