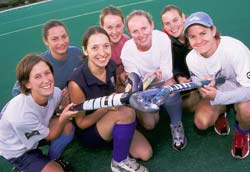 The UCT women's hockey first team took the 2003 season by storm by winning the Western Province indoor league - for, as far as anyone can recall, the first time - a remarkable turnaround from their results in the 2002 competition in which they ended second from bottom.

While they scraped through last season's event with a series of draws, the team won six of their seven games this time around, with only one tie against Pinelands in an eight-goal thriller. The students also managed to amass 36 goals in toto.

While considered primarily as a warm-up to the outdoor season - there's not even an exchange of silverware - the league still manages to attract most of the top teams in the province.

The UCT side's victory also marks an impressive start to the reign of player-coach Kerry Bee, who as assistant coach helped the side to third spot in last year's outdoor league, their best result in years. Bee, who's also vice-captain of the women's national side, took full charge of the UCT first-team squad at the start of 2003.

The team's promising run of form and their successful championship bid, she said, had much to do with the side working a little harder nowadays, having upped their practice sessions to three per week as of last year. "We are doing a few things differently, but I also think the players were just committed enough to win the indoor tournament this year," she added.

The men's side also won their indoor event, taking top spot for the second year running.