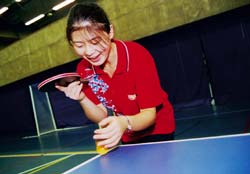 Putting her bid on the table: UCT's table tennis star recently a very successful visit to Mauritius, all part of her drive to make it to the Olympic Games in Greece.

She has the distinction of being the only woman in the Western Province premier league - where she goes up against the men - and also happens to be South African woman champion, but first-year business science student Jiajie Zheng still has a couple of table tennis targets in her sights.

One of these, Zheng confides, is qualifying for the Olympic Games in 2004 in Athens. Her bid to do so was given a boost in sunny Mauritius a week or so ago when, as a member of the South African senior squad, she took top honours in the women's singles and doubles events (the latter alongside Sameera Maal).

The 19-year old, who has represented the country's junior team since 2001, was also part of the winning SA pair to take the mixed-doubles contest. The Mauritius trip, explains Zheng, is part Friendship Games, part training camp for the All Africa Games, coming up in Nigeria in October of this year.

The Games will also be the final hurdle in her campaign to don the green-and-gold in Greece.

Zheng's mind, however, remains as much on academia as on table tennis, having left her family in Johannesburg - they moved to South Africa from China in 1999 - specifically to study at UCT this year. "For now, I want to continue with things as they are," she said, "and carry on with my studies while also playing table tennis."