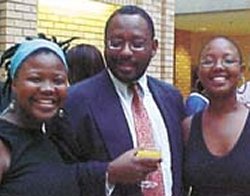 The judge heads the Jali Commission into prison corruption.

Referring to sexual abuses in prisons, Jali said: â€œThe point is that being held in prison is punishment itself; there is no further need for further mistreatment.â€

He added that the personal safety and dignity of inmates had to be guaranteed. â€œIf we fail to restore justice in our prisons we fail as a society. Then we will never succeed with the objectives of punishment, namely that it should be preventative, reformative and retributive.â€

Jali appealed to the legal profession to join hands in the fight against corruption and invited the assembly to put forward proposals to solve problems experienced by the Department of Correctional Services.

In his retrospective, Dean of Law Professor Hugh Corder reflected on the faculty's strong research record. Last year saw the completion of a definitive three-volume commentary on the Companies Act by Professors Mike Blackman and Richard Jooste (commercial law), together with Professor Geoff Everingham (accounting).

Professors Halton Cheadle (public law) and Dennis Davis (commercial law) had edited and contributed to a book on the Bill of Rights and the South African Constitution.