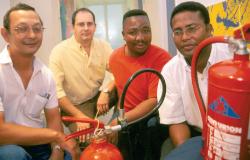 Coming to the aid of the party: Quick thinking and action by (from left) Noel Markgraaff, Hiram Arendse, Dr Deon Bezuidenhout and James Mowers made sure that a recent fire in the Polymer Sciences Laboratory did minimal damage.

The venue:
The Polymer Sciences Laboratory of the Cardiovascular Research Unit, located on the second floor of the Chris Barnard Building on Medical Campus.

The incident:
A scientist working in the lab is putting a bottle of ether waste into a metal drum used for waste disposal. As she picks up the bottle, the bottom half comes off and two litres of ether spill onto the floor. The scientist desperately tries to mop up the inflammable liquid, but before she can do so, it ignites, sparked by some unidentified heat source in the room.

The rescue:
Down the corridor, Dr Deon Bezuidenhout, Head of Polymer Sciences, actually hears the moment of combustion. He rushes to the lab, and sees that the scientists have made it out safely. He grabs a small CO2 fire extinguisher from a next-door lab, and begins to douse the flames.

The extinguisher is too small to do much to the fire, but when Bezuidenhout turns around, he finds that he's been joined by Hiram Arendse, Noel Markgraaff (both armed with more capacious extinguishers) and James Mowers, all from the Animal Unit.

While Arendse and Markgraaff attack the fire with vim and more CO2 – with support from the scientists, Jaco Theron, Lawrence Highham, and Anel Oosthuizen, and engineer Bruno Orlandi – Mowers tracks down additional extinguishers as far afield as the fifth floor in the building, and totes them back to the impromptu firefighters. He also alerts whatever staff he comes across to evacuate the building.

Sometime during the commotion, someone raises the general alarm and calls the fire-fighting department. Five or ten minutes, as someone would later report, and 13 extinguishers later, the fire is out, with Arendse delivering the coup de grÃ¢ce.

The 'aftermath':
Once the smoke clears from the lab, it becomes clear that damage – and financial repercussion – was minimal. None of the other chemicals in the lab were set off, and even the equipment got off reasonably unscathed.

The cavalry arrives in its red steeds, the marshals see that the fire has been contained, and after taking care of a smouldering noticeboard on a wall, begin removing the chemicals and equipment from the lab. Three hours later, staff are allowed back into the building.

Post-match analysis:
Once hands stop shaking, the rescuers calmly survey the scene. â€œIt was a sticky situation,â€ notes Arendse, modestly adding that he and the others had, beyond assessing the situation, attacked the fire without deliberating about it too much. Action was required.