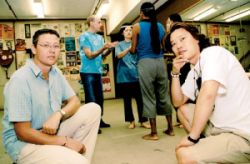 UCT's first African literature graduate from South Korea and his former supervisor have joined dramaturgical forces in a unique cross-cultural retelling of the story of Sara Baartman, the 20-year old Khoisan slave woman abducted from Cape Town in the early 19th century and put on exhibit in London and Paris as an icon of racial inferiority and black female sexuality.

Scripted by UCT graduate Dr Seok-Ho Lee and produced by the International Guerrilla Theatre based in the Korean Centre for African Studies in Seoul, Sara Baartman ran for two performances at the Baxter Theatre Centre over the past weekend, before moving on to the Castle of Good Hope, Block B, from March 2-7.

According to Lee, the play does not attempt a straight recounting of Baartman's life. Instead, the production is based on South Korean shaman rituals, and fuses elements of physical theatre with song, movement, gesture and body language, to create a spiritual and musical journey through the world of the Xhosa and South African peoples, he says.

Lee describes the work as an earthy, magical exploration of the mystical world of the South Korean spirits and Xhosa ancestors.

The play also attempts to universalise Baartman's story, Lee notes. â€œSara Baartman's suffering is, in one sense, very unique, but in another sense, it's not unique, because if you look into Korean history, you will find many Sara Baartmans,â€ he adds.

â€œWhat we are doing with this play is using Baartman's story as a metaphor for women's suffering.â€

The production is funded by the Korean Ministry of Culture and Tourism, and is supported by the Hankyeorae Daily Newspaper (Korea), Bella (Korea) and the Baxter Theatre Centre.

In addition to the Baxter and Castle performances, the play will also be taken into a couple of township schools before the crew and cast set off for Seoul for a six-week run kicking off on April 27.