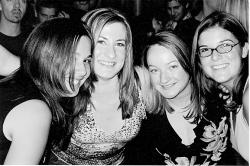 Friends forever: UCT's Anita Ballantyne (second from right) with some of the friends she made while studying at the University of California, Santa Barbara, last year: (from left) Iva Junsig (Yugoslavia), Rebekah Fuller (California) and Katherine Pontius (her California mentor).

ANITA Ballantyne formally sundered her relations with UCT at the end of last year when she completed her BA degree in film and media studies, but the Semester Abroad student delayed her farewells as she returned to Campus a few weeks ago to help the University welcome its own batch of international students.

Towards the end of last year, Ballantyne spent five months in the United States putting the final touches to her UCT studies by earning a few credits in communications at the University of California, Santa Barbara (UCSB). She and two other UCT students registered at UCSB as part of an exchange programme arranged by the International Academic Programmes Office (IAPO).

Academia, however, was not all that occupied the 21-year old during her stay in California. At the urging of UCT staff and her UCSB mentor, Ballantyne became involved in broader student life at the institution and earned herself, after an election campaign of presidential proportions, a position as vice-president of programming at San Rafael Residence.

She also made good off-campus use of her first visit to the US, taking sightseeing trips to San Francisco (calling on her sister while there), Los Angeles and Lake Tahoe, where she saw snow – â€œlots of itâ€ – for the first time. In addition, she immersed herself in the â€œAmerican experienceâ€, joining her hosts in celebrating Halloween (a big thing at UCSB) and, despite her vegetarian misgivings, Thanksgiving.

Staying at UCSB also proved to be a joy from an information technology perspective, with most administrative functions performed online on a super fast Internet network, reports Ballantyne. â€œAmericans don't really know what queues are,â€ she notes, casting an eye at the lines forming for UCT registration.

While lagging behind in areas like these, UCT does have the edge in IAPO, which not only prepared her well for her sojourn in the US, but also gives visiting international students a comprehensive introduction to UCT and Cape Town, Ballantyne observes. In addition to some solid administrative support, visitors are also chaperoned through a range of local experiences, be these mountain biking at Cape Point or visiting the SHAWCO centre in Khayelitsha.

â€œStudents coming to UCT are very lucky to find such a well-run international programme,â€ she says. â€œIAPO is really world-class, and the service compares very well with what I experienced at the University of California.â€