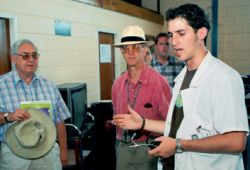 SHAWCO recently availed itself of the opportunity to show off the range and depth of its work in the Western Cape to a group of international Rhodes Scholars attending the Rhodes Trust's centenary reunion in Cape Town.

At the behest of the Trust, which celebrated the foundation and awarding of its first Rhodes Scholarships in 1903 with a gathering in Cape Town, SHAWCO's Anna du Bois served as guide to around 20 delegates, taking them on a whistle-stop tour of some of its local centres, including its outposts in Khayelitsha, Manenberg and Nyanga. Here the Rhodes Scholars – both former and current – received a first-hand introduction to the activities being run at the centres, speaking to both UCT students working on SHAWCO's mobile clinics, and to residents from the area.

The seniors' club at Khayelitsha also regaled the visitors with some impromptu interpretations of traditional hymns.

Among the Rhodes touring group were former UCT students Sir Franklin Berman (BA, 1959; BSc, 1960) and Colin Hoffman (BA LLB, 1963), who had both served as SHAWCO volunteers in the organisation's fledgling years in the early 1960s. According to Burman, SHAWCO's work – â€œdriven by the enthusiasm of studentsâ€ – had grown much since those seminal days.

â€œAnd it's quite an amazing thing to see, especially for those Scholars who have never been to South Africa before.â€