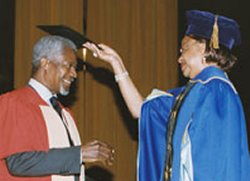 TABLE Mountain moved to New York for a few hours in December last year when UCT staged a special graduation ceremony that marked a milestone in the University's history.

Kindly hosted by Columbia University, and sponsored mainly by Vincent Mai, chairman of the UCT Fund Inc, the proceedings had the flavour and texture that make all UCT graduations memorable celebrations. The event brought together colleagues, alumni and North American friends of UCT who came to pay tribute to the honorary graduand, Kofi Annan, the Secretary-General of the United Nations and holder of the 2001 Nobel Peace Prize.

The ceremony introduced the largely American audience to some home-grown South African talent. Pre-recorded at UCT and projected onto a large screen, the UCT Choir for Africa began the proceedings with a rousing rendition of Gaudeamus Igitur.

The Chancellor, GraÃ§a Machel, constituted the assembly. â€œBy virtue of the authority conferred upon me, I constitute this assembly a congregation of the University of Cape Town.â€

â€œI hope that through this ceremony tonight you may gain something of the flavour of the values of excellence that the University of Cape Town has represented in more than 150 years of its life and continues to defend them more than ever in our new democracy.â€

In delivering the citation, former Vice-Chancellor, Dr Mamphela Ramphele, paid tribute to one of Africa's finest sons. â€œChancellor, on these grounds for his continued remarkable contribution to the realisation of the high ideas of the UN Charter, the fight for human rights, the rule of law, as well as international peace and security, I have the honour to invite you to confer the degree of Doctor of Laws, honoris causa, to Kofi Annan, the illustrious son of Africa.â€

In his response, Annan said: â€œI am deeply moved by the honour you have bestowed upon me today. The University of Cape Town is not only a great institution of learning, and as such a natural ally of the United Nations. As a powerful symbol of South Africa's diversity and democracy, UCT is also an inspiration to the continent and the world.â€

Addressing the gathering, Annan focused on the role of Africa's women in fighting the continent's twin emergencies of HIV/AIDS and famine.

â€œStudy after study has shown that there is no effective development strategy in which women do not play a central role. When women are fully involved, the benefits can be seen immediately: families are healthier; they are better fed; their income, savings and reinvestment go up. And what is true of families is true of communities – ultimately, indeed, of whole countries – That is why in Africa it is women who keep life going and it is why – if we want to save Africa – we must save the African woman first.â€

A sumptuous dinner concluded the proceedings and guests were treated to the best of UCT-nurtured talent with alumna Judith Sephuma serenading the diners. Special guest Wynton Marsalis set the tone for the evening with his smooth jazz sounds.