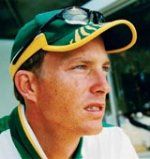 Fit, fitter, fittest: Andrew Gray has the task of keeping the Proteas in fine shape for the duration of the Cricket World Cup.

ANDREW Gray may not make it onto any of the 2003 Cricket World Cup's bullrings that often, but as physical training co-ordinator for the United Cricket Board of South Africa (UCBSA) and, more specifically, the Proteas side, he has a crucial role in taking the side to glory in the tournament.

Gray, who graduated from UCT in 1994 with a BSc (Med) Honours after finishing a BPhysEd at Wits University, was appointed by the UCB at the end of 2000, just a year or so after finishing a two-year stint as consultant to the national soccer side. In addition to his work with the senior cricket side, he is also responsible for co-ordinating training among the country's provincial sides, setting up and testing protocols, and advising provincial coaches, among other things.

With the CWC up and running, however, Gray has been on fulltime duty with the Proteas, keeping a keen and occasionally martinet's eye on the 15-man squad's fitness levels. The shenanigans at the three-day Drakensberg training camp shortly before the start of the CWC was partly his handiwork.

Among Gray's tasks throughout the tournament would be to make sure the team doesn't run out of steam too early.

â€œPhysically, it's impossible to keep their fitness levels at 100% or 110% all the time,â€ he told Monday Paper.

â€œIn order to stay at your best, you've got to create peaks and troughs in training – in my experience, that's how the body works. That's not to say we're going to slack off on any games – we're going to go in to win every game – but from a physical point of view, the off-the-field stuff is going to involve working harder on some days, and going easier on others.â€

And to make sure he stays up to date with the latest and greatest in sports science, Gray regularly peruses sports journals and articles. It also helps that his wife, Janine, whom he met in his Honours year at UCT and who also happens to be a senior lecturer in sports physiotherapy at the Sports Science Institute of South Africa (SSISA), is very involved in cricket research at the Institute.

But keeping the Proteas in tip-top shape and, as will happen during the CWC, staying in hotels even when in Cape Town, comes with a personal price, observes Gray.

â€œIt's a great job and I really enjoy it, but there are a lot of sacrifices, like I've missed most of the first year-and-a-half of my son's (Matthew) life, and you never really get that back.â€

Being in Cape Town just prior to the event has helped him to catch up with things domestic, but for now, Gray is focused on getting Polly and the boys through the World Cup, and understands very clearly the responsibility he must bear in the side's ambitions. â€œThere are 20 guys involved in this World Cup, and if one of us is not pulling his weight, we're not going to win it,â€ he reflects.

â€œFor any biokineticist that's involved in training a team, this is the ultimate because you actually have an influence on the side, an influence that could win or lose games. I work as part of a team, but if I can, through my job, avoid an injury or if I can make a player 10% fitter, it might mean the difference between winning the World Cup or not winning it.â€