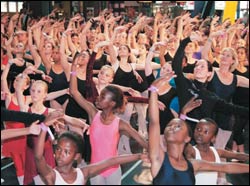 A sea of dancers: Some of the participants who took part in a world record attempt to stage the largest ballet class in the world, held at Canal Walk.

Canal Walk was a hive of activity on Sunday, October 12, when 530 ballet dancers descended on the shopping centre to participate in a record attempt to stage the largest ballet class in the world.

Thirty-six UCT students and 80 junior UCT dancers took part in the event, which also included company dancers from Cape Town City Ballet (CTCB) and amateur dancers from 38 studios across the Western Cape, some from as far afield as De Doorns and Vredenberg.

Accompanied by UCT pianist Ally van Oort, a sea of leotards and tights performed barre work and centre practise to the amazement and delight of the thousands of spectators who had gathered at the centre's food court.

The brainchild of CTCB's publicist, Andrew Warth, the record attempt also served the purpose of taking ballet to the masses.

"I was sitting at Canal Walk one Sunday reading my newspaper and sipping my coffee, pondering how to make ballet more accessible. It came to me as a 'vision' that instead of trying to get people into the theatres, I should get the dancers to do something right here.

"After checking the Guiness Book of Records and not finding any entry under dancing or ballet, I wrote up a proposal and waited three months for a reply. Guiness accepted the proposal but specified stringent rules and regulations we would have to adhere to."

The regulations included having two international observers present at the event, as well as a thorough registration process. A package consisting of all the necessary documentation and visual material will now be sent to Guiness's offices in London.

"The record attempt was phenomenal but there's more to it than that," explained Warth. "It's about putting ballet on the map and providing the opportunity for young dancers to do a class with their CTCB heroes.

"Everything in ballet takes time. But the journey of getting people to hold ballet in high regard and see it as a full time career began today."

After many months of hard work and sleepless nights, Warth's dream has finally become a reality. And even to the untrained eye of a journalist, the future of ballet looks bright as there appeared to be loads of talent and even a few young rising stars among the multitude of dancers who took part in the event.