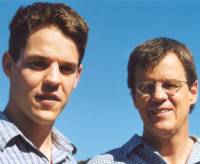 Keeping it in the family:
Jan van Zyl Smit (left) and his father Professor Dirk van Zyl Smit of the UCT Institute of Criminology.

This year has been something of a pinnacle in an already outstanding track record for Van Zyl Smit, who handed over the Presidency of the Law Students' Council in September.

He was also chosen as one of four research clerks at the Constitutional Court for next year and was awarded a Rhodes scholarship to study at the University of Oxford. â€œI'm really looking forward to next year. It will be a great opportunity to learn from all the people there; judges, lawyers and clerks.â€

Van Zyl Smit says he moved from mathematics (where he holds an honours degree) to law because he felt that law offered him the chance to make a contribution to society.