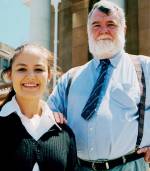 Kim is the youngest of Tim and Anna Crowe’s three children (the other two are in the United States).

Her choice of degree represents a departure from her parents' predilection for the natural sciences. Anna is a biology teacher and received her Master of Science degree from UCT in 1986, while Crowe, who has been with the University since 1973, received his PhD from UCT in 1978.

“I’ve always been creative, with a mathematical bent, so marketing seemed a good choice,” Kim told Monday Paper. “And the money’s good,” she quipped as an afterthought (to silent applause from her father).

“Everyone talks of the graduation ceremony being like a cattle race. But it will be special to be capped by my dad,” she added.