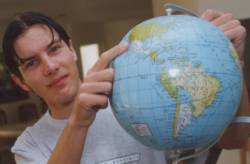 
NEIL Olver has had lecturers in the Faculty of Science racking their brains trying to find a precedent, but, reports Professor John Webb of the Department of Mathematics, thus far no-one can recall any previous graduates matching Olver's feat of finishing off a science degree with four majors, all passed with distinction.

Having completed third-year maths in his second year of study, Olver this year rounded off his degree with distinctions in third-year applied mathematics, physics and computer science.

And as if that wasn't challenging enough, he and UCT teammates Carl Hultquist and Bruce Merry — competing as team â€œTeddyborgsâ€ — also won the Southern African regional finals of the fourth ACM International Collegiate Programming Contest in October, finishing their five programming problems three hours ahead of the next team.

With their win, the three qualified for the world finals in Honolulu, Hawaii, in March 2003, where they will go up against 63 other teams from around the globe.

Olver, who has been one of the outstanding students at the Department of Mathematics' annual school competition over past years, ascribes his success to plenty of hard work and a longstanding partiality to mathematics. â€œI like its elegance and simplicity; it's sort of nice and clean and logical,â€ he notes.

â€œAnd I was just lucky that I was good at something that I enjoy,â€ he adds modestly of his trailblazing BSc.

One of Olver's teammates in the ACM event, Bruce Merry, has also enjoyed a good year with the books. Merry took only two years to complete his BSc — with majors and distinctions in mathematics and computer science — but because of University rules will have to wait until the end of next year to graduate, by which time he will more than likely have completed his Honours degree in computer science as well.

All in all, a year that the Faculty of Science definitely will remember for some time to come.