MBAs celebrate end of their studies 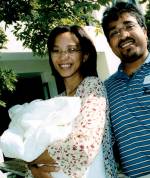 Leading the way: Nandu Bhula, here with his wife Clothilde and week-old son, Rohan, was one of the big winners at the GSB's recent MBA prizegiving.


IT'S STILL a while before they actually graduate – there's still a pesky project to contend with – but full- and part-time MBA candidates at the GSB have celebrated the near-culmination of their studies with a prize-giving bash at their Waterfront locale.

More than 20 prizes were handed out to members of the 2002 full-time class and their 2001/2002 part-time counterparts. Sponsors were on hand to present the awards to the deserving recipients, who were laurelled for their achievements on the many MBA courses.

Big winner on the day was part-time class member Nandu Bhula, who celebrated his five awards with his wife, Clothilde, and son, Rohan, who at a week old was the youngest person attending the function.

Classmates Kari Amelung, Jacqui Kew and David Priilaid, a UCT staff member, along with full-timer John Orford, walked off with two prizes each.